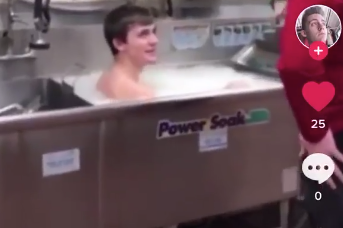 Multiple Wendy’s employees have reportedly been fired after they filmed a man bathing in the restaurant’s kitchen sink.

In the video, which was uploaded to TikTok, a shirtless man, believed to be an employee, sits in soapy water in the restaurant’s industrial sink at the Greenville, Michigan, location.

“Wash yourself,” a Wendy’s employee can be heard telling the man, as he throws what appears to be a wash cloth at him.

The man in the sink then responds: “It feels like a hot tub. I’m just enjoying life.”

The video was later shared on Facebook, where it has been viewed more than 157,000 times, with the caption: “So yeah I’m just gonna tell everyone right now DON’T GO TO THE GREENVILLE WENDY’S.

The video prompted many people to express their disgust over the incident.

“This needs to be reported to the local health department,” one person wrote.

Another commented: “So disgusting and definitely unsanitary.”

A spokesperson for the Wendy’s franchisee, Team Schostak, confirmed the incident had taken place in one of its restaurants to The Daily News.

“We take it very, very seriously,” Christian Camp, vice president of human resources for Team Schostak, told the outlet. “We have already taken the proper steps to make sure something like this never happens again.

“As soon as we learned of it, which was this morning, we quickly got into action and approached every person that was involved. We’ve been looking into the matter all day, trying to find out what happened because we want to make sure that we are safe for our employees, and obviously our guests, so we take this matter extremely seriously. We’ve taken the appropriate steps to make sure this doesn’t happen again.”

In a statement to TMZ, the restaurant’s owner said all of the employees in the video had been “terminated immediately” and that the health department had not reported any violations during a visit to the restaurant following the incident.

“This egregious behaviour is completely unacceptable and counter to our safety, training and operational standards,” the franchise owner said. “Upon learning of this situation, all employees in the video were terminated immediately and the restaurant has been completely sanitised. The health department visited the restaurant today and no violations were reported.”

The Independent A mother and her sex offender lover have been jailed for more than 20 years each for the murder of her ex-husband during a “medieval duel” in an east London tunnel. Asta Juskauskiene, 35, arranged for her new 25-year-old partner, Mantas Kvedaras, to fight the father of her daughter Giedruis Juskauskas for the right […]

The Independent A man accidentally killed his neighbour by shooting him with a crossbow while trying to save him from being attacked by two pit bulls. The unnamed man was targeting the dogs with the weapon, but the arrow ricocheted off one animal and hit Joshua Jadusingh, prosecutors say. The 27-year-old victim had been in his own apartment […]

The Independent Police officers would be granted the power to prevent women from having an abortion under a new bill proposed by a politician in Missouri. Mike Moon, a Republican Missouri state representative who previously shared a video of himself decapitating a living chicken on Facebook to justify why abortion should be banned, introduced the […]