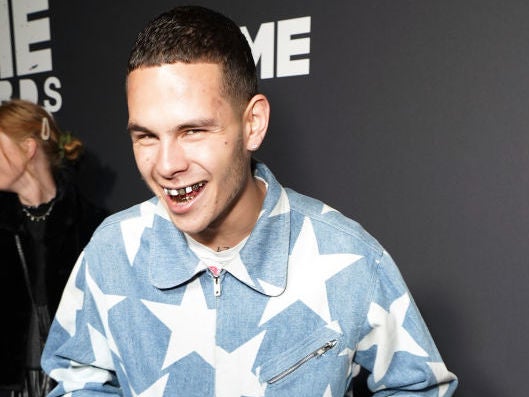 Slowthai has issued an apology to the comedian Katherine Ryan, who he was accused of harassing at an awards ceremony.

In a statement on Twitter, the British rapper took full responsibility for what he described as “shameful” behaviour towards the comic while he collected the Hero of the Year trophy at the NME Awards last night (13 February).

“Please forward my award to @kathbum [Katherine Ryan] for she is the hero of the year,” Slowthai wrote.

“What started as a joke between us escalated to a point of shameful actions on my part. I want to unreservedly apologise, there is no excuse and I am sorry. I am not a hero.”

In a second tweet, the rapper added: “Katherine, you are a master at your craft and next time I’ll take my seat and leave the comedy to you.”

He continued, “To any woman or man who saw a reflection of situations they’ve been in in those videos, I am sorry. I promise to do better. Let’s talk here.”

At last night’s ceremony, Slowthai pawed at Ryan, who was hosting the event, and made a number of lewd comments towards her.

“Baby girl, I don’t want to have to do this right now,” he said. “If you want to do something, see me later. She wants me to tend to her flowers … You’ve never had no one play with you the way I play.”

The rapper followed up the incident by getting into an altercation with an audience member who began to heckle him, calling him a “misogynist”. In response, Slowthai hurled a glass of wine into the crowd and attempted to fight the fan, until he was pulled away by security.

Ryan, who tweeted that she was not made to feell uncomfortable by the incident, has yet to respond to Slowthai’s apology.

In a tweet last night, however, she said that had “defused” the situation, adding: “I knew he had lost from the moment he opened his mouth.”

The Independent Boris Johnson has increased the proportion of cabinet ministers from privately educated backgrounds, with nearly two-thirds of his top team having attended a fee-paying school. Despite boasting to have formed a cabinet reflective of modern Britain when he entered Downing Street, new research now shows that members of his top team are nine-times […]

The Independent The leader of Germany’s main governing party – widely seen as Angela Merkel‘s anointed successor – has said she will step aside and not stand to become Chancellor. Annegret Kramp-Karrenbauer took over as head of the centre-right CDU party in December 2018 but admitted that her party had faced a “difficult year” with […]

The Independent Financial regulators worried about a repeat of the boom-bust cycle that has plagued many western economies including the UK should keep an eye out for a jump in the number of builders, according to the International Monetary Fund. Based on analysis of crashes in both advanced and developing countries stretching back to the […]